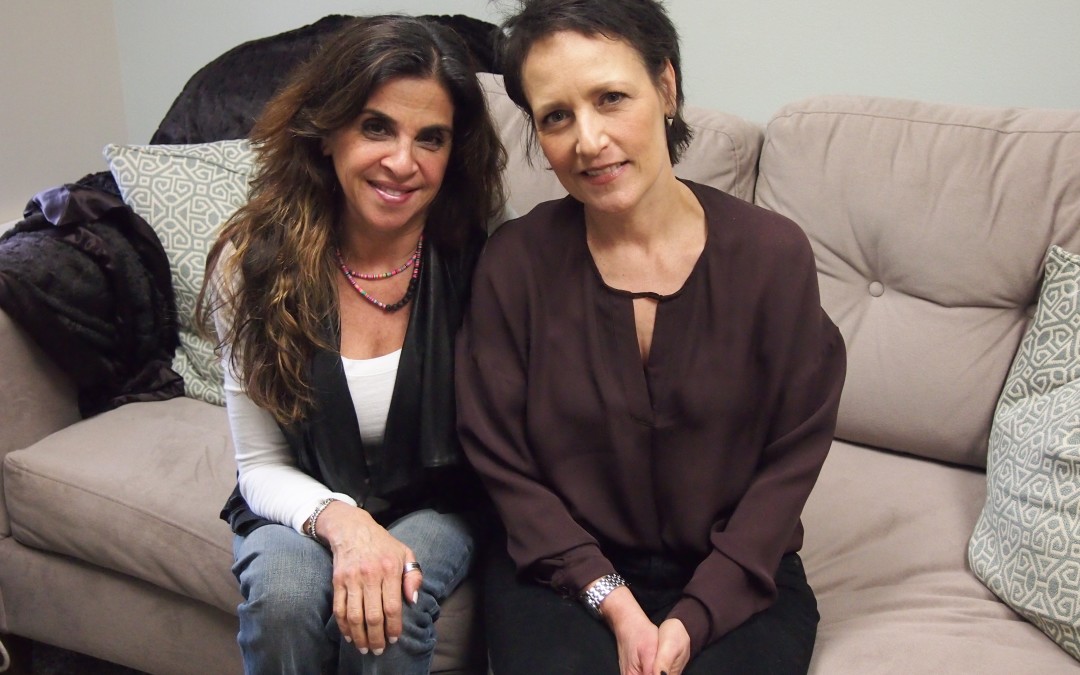 As published at People with Panache

I knew these scary-sounding, taboo things would be major topics of discussion when I went to interview Lesley Foreman and Jami Weiman, both 51. But as I opened the door to Lesley’s office, where she has her therapy practice, the first thing I saw was the pair of them giggling while Jami sprayed Lesley with something to stop static cling. Her silk shirt wasn’t cooperating. They looked at me and laughed harder now that I’d caught them. I laughed too, and all my fears melted away.

Jami has been living with Crohn’s disease for more than 35 years, and Lesley was diagnosed with ovarian cancer at age 48. They told me about their friendship, growing up together, and the impact their respective diseases have had on them—and how that led them to create Bwell 11. Bonus: I also learned that Jami attended Drake University for a year—our alma mater! Go Bulldogs!

Launched on July 15, 2015, Bwell 11 is a line of versatile fashion swimsuit cover-ups. Their Bandtastikcan be worn in seven different ways to cover up a number of areas on your body from thighs to chest. The Bandiva is a colorful head scarf that can get wet and still stay firmly in place. It seems so fitting that swimwear that makes you feel comfortable and beautiful—even in life’s toughest moments—comes from such a kind and loyal friendship.

People with Panache: You two have been friends for decades now. How did you decide you wanted to start this business?

Lesley Foreman: Rewind a moment to my first vacation post chemotherapy: I was on the beach. I was very thin, very bald and very self conscious of having a giant chest port, which I still have. I had bought this beautiful, expensive head scarf that was for women going through chemo, but I didn’t feel confident because I really didn’t want this port showing. Some women are cool with that—I was self conscious. So the moment I entered the ocean, a wave hit me, my scarf flew off, and I was bald at the beach. For me, that was very hard. I didn’t like it. Not only that, I was a couple blocks from my hotel and I was thinking, “Now I have a wet scarf all day. Why hasn’t somebody created a beautiful scarf or headpiece that can get wet?”

That sort of started the wheels spinning. Why isn’t there something out there, a suit or whatever, that covers the port?

Bwell 11 is designed and manufactured in Chicago. “Our compass pointed toward a higher-end, fashion-oriented woman,” Lesley says. “We found a fabric blend we really loved. We wanted it to be soft; we wanted it to hold up. Ours can get wet and handle salt and chlorine. Just hand wash it and let it dry.”

Jami Weiman: When I was diagnosed with Crohn’s, I weighed 76 pounds and was in the hospital for 6 weeks. I had a feeding tube in my chest to rest my bowel, and I gained 20 pounds in 2 weeks. So I had all these horrible, really red stretch marks on my thighs. You’re 15 years old and you’re already so insecure—plus that was back in the Jane Fonda days with the really high bathing suits and stuff—it was horrible. I was on so many steroids and my face was huge; people didn’t recognize me.

PWP: When you explain it like that, it’s shocking something better isn’t easier to find by now. It seems like you two created just what you would’ve needed to feel confident in those moments—though maybe not quite Jane Fonda style.

LF: When I came home from that vacation, Jami and I started talking about it. Over the years, she and I had talked about different product ideas for women going through illness. Once we started researching ports, we saw there are an enormous amount of ports inserted every year for a variety of illnesses, not just cancer. Then we started understanding the variety of abdominal pouches, pumps, drains—we just started exploring. There are so many medical marks that a woman might have as she’s going through treatment that you might want to cover in a bathing suit. It’s all evolved from there. We started talking about it, researching and testing ideas.

PWP: We read recently that about 843,000 women will get cancer diagnoses this year—and there are so many other illnesses that number doesn’t include. How is it that there aren’t more options like your products out there?

LF: There are some that exist, but when we started researching what was available and marketed to a woman with illness, everything was so outdated, so matronly, almost depressing to us. Why can’t a woman maintain her personal style through illness? We married those ideas: style and illness, style and cancer. Why can’t the two go together? That sort of formed our company.

“Women were liking the Bandtastik even as a cool cover up around their hips,” Lesley explains. “Or younger women were wearing it as a bandeau with a bikini bottom, and the next day they were moving it around and wearing it as a cover-up around the hips, even if they don’t have medical illness. It’s really cute.”

Eventually we created a tagline—Coverage You Can Control—because we found our product, the Bandtastik, can be used in seven different ways. You can move it around the body according to your own needs. That was the foundation of the company. We’re not pretending our products are for everybody. We understand they’re not, but they’re for women like us who really care about fashion and style, maintaining our integrity and feeling good about ourselves. We haven’t invented something miraculous here, but our cover-ups can get wet and stay in place. Those things are a big deal. It’s cute, and we tried to make it where it doesn’t have ‘cancer’ written all over it.

PWP: How did your friendship factor into where you are today?

JW: We met at 11 years old, and I was diagnosed with Crohn’s at 15. Lesley’s basically been a part of my whole journey to date. She was there when I was so sick, and we didn’t know what was wrong with me at first—we’ve never really discussed that. But now she’s sick, and I’m on the other end seeing how hard it is to watch somebody be sick.

LF: Throughout our friendship, we’ve really had many role reversals. She was very ill when we were so young, and I didn’t even really have an awareness of it. Then I was diagnosed with ovarian cancer at 48. She had a different role in my illness. She’s been an amazing caretaker. She knows what it feels like to go through surgeries and hospital stays, everything about it. She’s always one step ahead and that’s very, very helpful—with not just good intentions but experience.

PWP: What are you most proud of in the process of creating your products?

LF: That we had zero experience with everything from setting up the business to the marketing and social media. What’s really funny is neither of us were even on Facebook until we launched. It’s enough to make a person say, “No way, I’m not getting into that.”

We did it. No matter where this goes, I think we can both be really proud of just going for something. We say there is no failure. Failure would have been having this idea and not going for it. This is very grassroots over here.

They’re marketing toward hospitals—mostly cancer centers, chemo centers, medical boutiques—as well as the many, many places where a woman goes to get mastectomy bras, prostheses and other medical supplies. They also just got into Cancer Treatment Centers of America, and they want to partner with Crohn’s organizations, cancer organizations, events, races, and fashion shows in addition to their online presence through their website and sites such as Amazon.

PWP: What were the biggest challenges for you, and what advice do you have to overcome them?

LF: The entire learning curve has been a challenge from initiation through completion of the project. We didn’t know what we were doing. We certainly never developed a product and manufactured it. What’s great is that we both have the same exact skill set: We will call 20 people, both of us, to figure out how to get it done. I really think that’s what holds people back from acting on good ideas. It’s that the X factors are so scary. You just have to open your mouth and ask around. And you’d be very surprised what people around you will help you with.

I think that’s really what it takes to develop a business. You have to have the guts and self-confidence to just ask. What’s the worst thing that could happen? Someone says “I don’t know”?

JW: I’m a firm believer that if you want something and don’t ask, you’ll never know. I can’t live with that. I’d rather hear no than just always wonder.

LF: Also, if you have a good idea, just think it through and go for it. I think everybody has a good idea inside of them. It doesn’t have to be a product. Maybe it’s a service or possible relationship. Whatever it is, we all have good ideas. I think the only reason we don’t act on them is because something inside of us stops us. If there’s something you feel a strong pull toward, just at least explore it. I don’t think at the end of the day we regret those kinds of decisions.

We can so imagine the feeling of the wave that inspired Bwell 11. Whether it’s an actual slap from the ocean that steals your head scarf or sunglasses, an enlightening book, a breakup, or a career shift, what moment inspires you? What’s your Bandtastik idea? For us, it was meeting Jon-Girl and knowing we had to share women’s stories like hers!

PS: Check out Lesley’s blog post: “When You Want to Get Something Done, Give It to a Woman” on The Huffington Post.